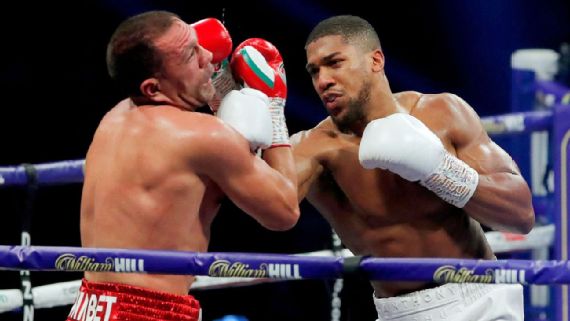 Anthony Joshua did not let his mind wander ahead of his bout against Kubrat Pulev. He’d tripped over hurdles before, failing to anchor himself in the present. But all week he refused to look beyond Pulev, and that unwavering focus led him to a ninth-round stoppage Saturday in front of 1,000 fans at the SSE Arena in London. Joshua knocked Pulev down in the third round with a sweetly struck uppercut, yet the Bulgarian’s strong chin kept him in the fight until the ninth. A flurry of uppercuts and a straight right hand eventually floored the spirited Pulev.

For Joshua (24-1, 22 KOs), this was as much an exorcism of that ugly Andy Ruiz Jr. spell as it was a reminder of Joshua’s ruthless ability to stop a fight in its tracks. The uppercut was on point as Joshua lived up to his promise of thrilling, but despite his laser-like focus, this felt like a starter with the main course yet to come.

Joshua didn’t even mention Tyson Fury’s name in the buildup to this fight, but the WBC belt holder and a potential epic matchup in 2021 between them hovered over this bout as an omnipresent distraction. It was only after Pulev had been dispatched that Joshua eventually mentioned those two words of the man standing in the way of a unification

READ  Maureen Badejo Vs MFM: A Team Heading To Hell

“When I started this game in 2013 I’ve been chasing all the belts, dealing with mandatories,” Joshua said. “Of course, I want a challenge, it’s not about the opponents, it’s about the legacy and the belts — whoever’s got the belt, I’d love to compete with them. If that’s Tyson Fury, let it be Tyson Fury. It’s no big deal.”

Fury turned down Matchroom promoter Eddie Hearn’s invite to be ringside at the SSE Arena, but he watched from a distance as Joshua defended his WBA, IBF and WBO titles and lived up to his prefight promise of “destroying [Pulev’s] soul.”

It’s been a long time between fights — a year and five days since Joshua stopped Ruiz in the Saudi Arabia rematch following his Madison Square Garden nightmare. There were concerns Joshua would show ring rust, but to combat that, he sparred throughout Thursday evening of fight week, alarming his trainer Rob McCracken by not wearing headgear just days out from the fight.

Pulev (28-2, 14 KOs), 39, was a competent opponent and did land a few jabs on Joshua, but the British fighter was in control throughout.

Floyd Mayweather Jr. was ringside, calling on Joshua to use the jab more, but Joshua did this his way and stuck to the plan of dispatching Pulev and avoiding another slip-up.

He prepared for this fight like Wladimir Klitschko did for Pulev back in 2014. Back then Joshua was one of Klitschko’s sparring partners. He spoke to the Ukrainian great for an hour on the phone Wednesday, looking for inside information on his opponent and gleaning any knowledge from Klitschko on how he inflicted the only other defeat in Pulev’s career before Saturday.

This performance was reminiscent of Klitschko, as were his postfight words.

“I’m the best version of me — I’m not in a fight with anyone else, just myself,” Joshua said, avoiding any predictions of who he’d get down the line.

The next step for Joshua could be mandatory WBO challenger Oleksandr Usyk, but the boxing world wants to see the all-British superfight against Fury. The “Gypsy King” has taken a chunk of Joshua’s spotlight this year thanks to his win over Deontay Wilder back in February, but Joshua will never linger long in the shadows.

Joshua will know deep down he’ll have to improve further if he is to defeat Fury. It felt as though he could have finished this fight against Pulev earlier, but let the Bulgarian get back in. Against an opponent like Fury, he can’t afford to give those opportunities, nor get drawn in by Fury’s distractions. Joshua has long prided himself on avoiding the pantomime of boxing. He was concerned that his win over Ruiz back in December wasn’t entertaining enough. After Saturday’s victory over Pulev, he immediately spoke of his hope that the 1,000 fans lucky enough to secure one of the tickets had enjoyed the show. But this was about winning, little else.

It was just like Joshua’s previous fight in the U.K., which was back in 2018. It was in the same corner of London, complete with the flaming AJ initials and the White Stripes’ chest-thumping bass guitar riff to welcome Joshua into the arena. Back then, his seventh-round stoppage of Alexander Povetkin was meant to be the last hurdle before a unification fight. But Joshua’s perfectly laid out plan for world domination had to wait as Ruiz stunned the Brit and the boxing world. This victory saw him steer his show back on track. This victory offers Joshua the platform to chase boxing immortality with Fury, who turned to Instagram postfight promising to knock Joshua out in three rounds, lying in wait.

Joshua has done his bit — he built his preparations on “less talk, more action.” That’s his message to the waiting boxing world. Now the power brokers need to get the deal done to give boxing the fight it wants.