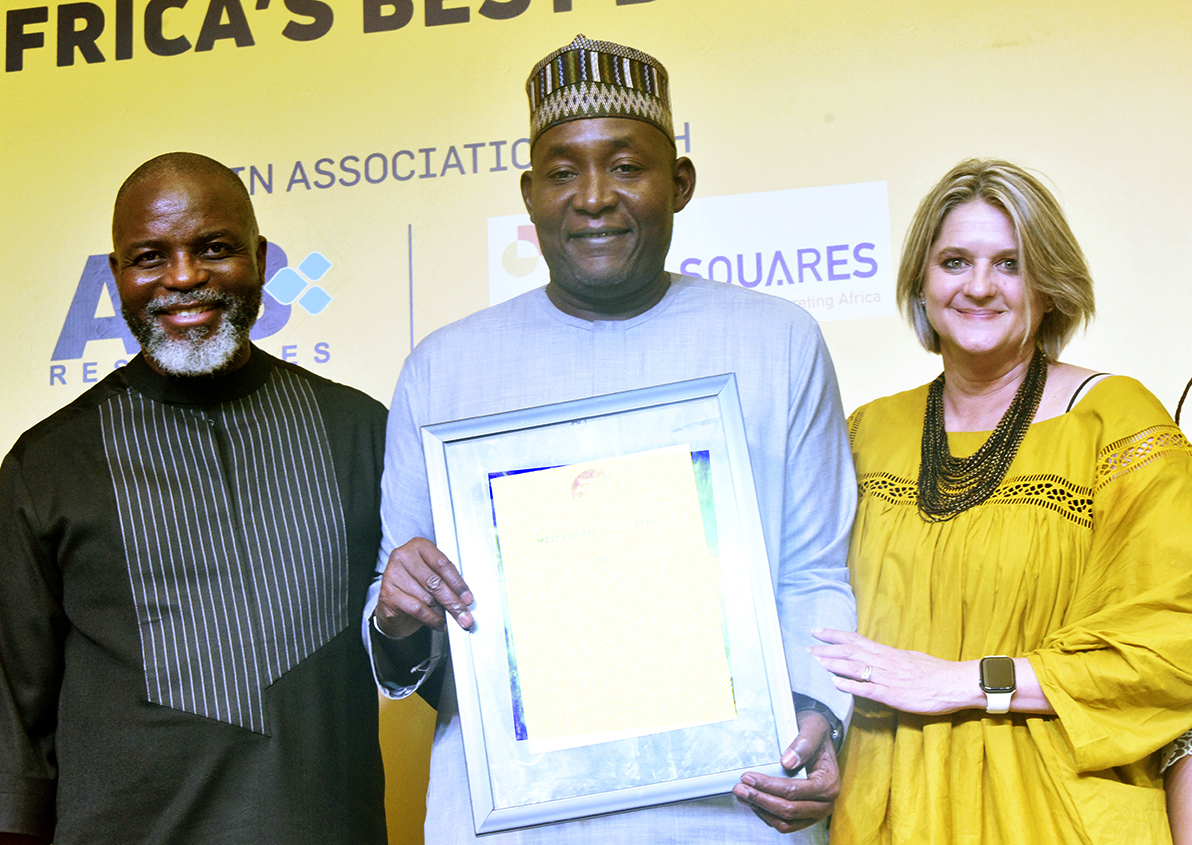 Sahara Weekly Reports That The Pan-African and fully integrated conglomerate, Dangote Industries Limited (DIL) has again emerged as the Most Admired Brand in Africa for the year 2022, to its leadership position in driving quality brands across the continent.

Founder and Chairman of Brand Africa, Thebe Ikalafeng, stated that Dangote has remained a stalwart global African brand and symbolizes African pride. He added that Dangote has also moved up a rank in the Top 100 most admired brands and retains its #1 Made-in-Nigeria brand rank.

Ikalafeng, giving an insight into the process of selecting the winners, said the rankings are based on a pan-African survey covering over 25 countries, which collectively account for an estimated over 85% of Africa’s population and 85% of the continent’s GDP.

In a recent issue of the Brand Africa 100: Africa’s Best Brands rankings, Dangote and MTN retained their statuses as the most admired African brands recalled spontaneously and when prompted, respectively.

Group Chief Commercial Officer, Dangote Industries Limited, Rabiu Umar, who received the awards, commended Brand Africa for the initiative of building and promoting African brands. He expressed appreciation to the organizers and urged them not to relent in their efforts to see that brands from Africa compete favorably with foreign ones.

Umar said that Dangote has risen a notch higher as a global brand with the export of Dangote Fertiliser to many countries of the world. “People now identify with the brand and in all the countries where we operate, Dangote Cement has become a reference point,” he added.

Umar said, “To the management of DIL, the ranking was not unexpected, because the company has a long-standing reputation for quality, relevance, compliance,,, and social stewardship. Our mission and vision engage and inspire us, and by extension connect us to both our internal and external stakeholders.

“We fervently believe that only Africans can develop Africa, and this gives us a stronger sense of relevance in all the countries where we have our operations. We are touching lives by providing their basic needs and empowering Africans more than ever before, creating jobs, reducing capital flight, and helping the government to conserve foreign exchange drain by supporting different industrial and infrastructural projects of African governments.”

Established in 2011, the Brand Africa 100: Africa’s Best Brands rankings are the most authoritative survey and analysis on brands and underlying businesses in Africa, based on a study by Geopoll across 29 countries spanning all the five economic regions.

An analysis of the data over the past 10 years, has established that on average, slightly over 20% of the brands admired by Africans are made in Africa. 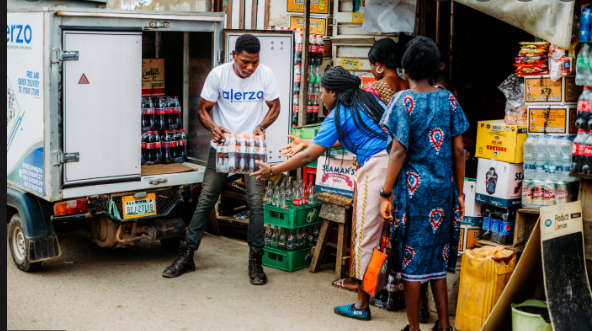 It truly takes time and energy in moving around an open market to source for goods in order to restock, which brings about body aches and fatigue most retailers have shared.

These experiences are fading with ease of shopping and feeling of well-being taking over as retailers conveniently make their orders online, make payment and within a maximum of four hours, their goods get directly delivered to their stores without inclusion of transport charges.

Isn’t this pretty cool? Absolutely! Yisau Bolaji who runs a grocery store expresses as he recounts how his life has changed since he discovered Alerzo, an e-commerce platform that enables him carry out his business conveniently.

The emergence of tech firms in e-commerce has been a game changer in the retail sector. More opportunities are being provided to help retailers operate their businesses with ease and maintain healthy lifestyles.

Bolaji who talked about how his health has improved said,”It is a lot of stress going to the market to restock. When I come back from the market, I come back with headache

“But since I started patronising Alerzo, things are different. Alerzo has a vast assortment of goods. Secondly, Alerzo saves me money on delivery and transportation, aside from the convenience .

“My health has improved because I no longer go through the stress of buying goods in the open market and returning home with a headache. So I’m enjoying the convenience and it is good for my health and wellbeing.” 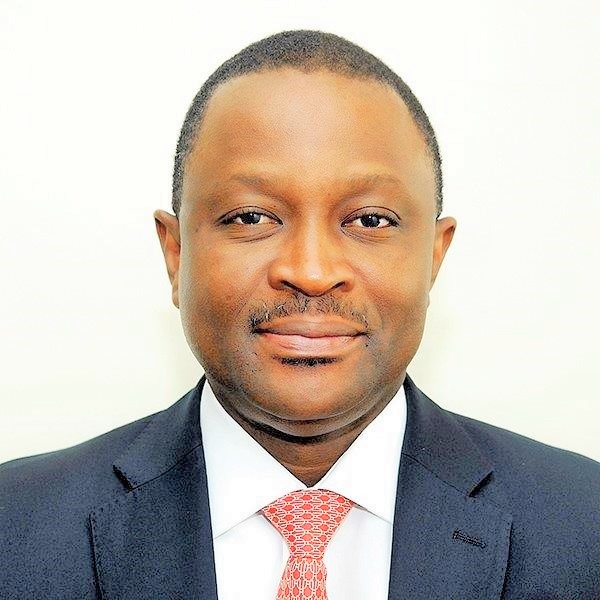 Mouka, the market leader in Nigeria’s sleep industry and a new member of the Dolidol International group, has appointed Dr Adesegun Akin-Olugbade as its new Vice Chairman.

The Board of Mouka’s parent company, Dolidol, has given their vote of confidence to the new Vice Chairman, who has an impressive resume of sterling accomplishments.

According to the Managing Director of Mouka, Mr Femi Fapohunda, the new Vice Chairman’s expertise is in finance, corporate governance and law. As a Non-Executive Board Member, his input and guidance to decision-making by Mouka’s Executive Directors would help propel Mouka to even greater heights.

Dr Adesegun is the Founder and Managing Partner of Luwaji Nominees, a legal and corporate advisory services firm and currently serves as Of Counsel at Clifford Chance (CC Worldwide Limited) and International Counsel at ÆLEX.

He is a graduate of King’s College London (LL. B (Hons) 1983, LL.M 1985) and Harvard Law School (LL.M ’88 and SJD ’91), in addition to being the Overall Best Student at the Nigerian Law School in 1984. He has served for over 30 years in the legal profession and financial services sector; having worked at both the technical and executive management level, in the public and private sector, for leading commercial law firms, multilateral development banks and international financial institutions.

He was previously General Counsel and Senior Director at the African Development Bank (AfDB) (2000 -2007) and the first Chief Legal Officer and Head of the Legal Services Department of the African Export-Import Bank (Afreximbank) (1993 – 1997). In December 2018, he retired as Executive Director (Chief Operating Officer), General Counsel and Corporate Secretary of Africa Finance Corporation (AFC).

Adesegun A. Akin-Olugbade has significant Board level experience. He was a non-Executive Director and former Chairman of the Governance Committee of Ecobank Transnational Inc. (ETI). He was also a Founding Director and Managing Partner of AFC’s wholly owned subsidiary, AFC Equity Investments Limited, Mauritius. He was a founding shareholder and former non-Executive Director of Asset & Resources Management (ARM) Company, a leading financial services company in Nigeria.

In 2003, he was invited to be a member of the Committee on International Monetary Law of the International Law Association (MOCOMILA) and joined the World Trade Board as the first African member in 2019.

He is an Officer of the Order of the Niger (OON), a national honour conferred on him by the Nigerian Government in September 2012. The expectation that Nigeria’s current dollar crunch could subside soon has again been dashed as the country’s crude oil production remained below expectation, slumping to 1.083 million barrels per day in July.

July’s production figure, sourced from the data released by the Nigerian Upstream Petroleum Regulatory Commission (NUPRC), followed the trend in the country’s abysmally low drilling capacity in at least the last 10 months.

For the month under review, however, the country’s production allocation by the Organisation of Petroleum Exporting Countries (OPEC) was roughly 1.8 million (1.799) barrels per day.

While the rest of the oil-producing world and oil majors continue to enjoy high oil prices, Nigeria’s case has been different.
Though the country currently needs every dollar it can get, as pressure on the economy, due to the near non-availability of the greenback continues to mount, the slump in oil production has dashed this hope.

For months, the Nigerian National Petroleum Company Limited (NNPCL) has not been able to remit a kobo to the federation account.
The company blamed the extant subsidy payment regime as well as the massive ongoing oil theft in the Niger Delta.

In addition, Nigeria has fingered years of declining upstream investment, inability to restart oil wells shut in the wake of the COVID-19 pandemic in 2020 as well as outright sabotage by oil-producing communities for its lack of capacity to raise production.

If there’s no improvement by September, the production deficit is likely to get worse, since OPEC and its allies agreed to an increase in oil production this month, following calls by the United States and other major consumers for more supply.

In the latest round of distribution of quotas, Nigeria got a modest 4,000 bpd increase, raising its production quota to 1.830 million bpd for September as opposed to the 1.826 million bpd output it got for August and 1.8 million bpd in July.

In the 2022 budget, the federal government pegged the crude oil benchmark at $73 bpd with the projected oil production put at 1.88 million bpd

A recent review indicated that Nigeria produced less crude oil in the first six months of this year compared with the same period in 2020 and 2021.

The NUPRC data further showed that in the first six months of 2021, when the world had started recovering from the pandemic, Nigeria also surpassed this year’s six-month drilling total for the same period by 28.6 million barrels.

Of the country’s recorded 35 terminals/streams, the NUPRC data showed that Ajapa, Ima and Anambra Basin remain non-producing, while Tulja-Okwuibome started producing in 2022, after a period of dormancy in 2020 and 2021.

The new low production became worse in May when 1.024 million bpd was recorded. In June, it was 1.158 million bpd, according to self-reported data by the government, however, it has fallen again to 1.083 million bpd in July, far from the projection for the period. It was also markedly lower than the production for April, which stood at 1.219 million bpd.

But despite the huge gulf between expected and actual production, the Minister of State, Petroleum, Mr Timipre Sylva, had recently said the gap would be filled by this August.