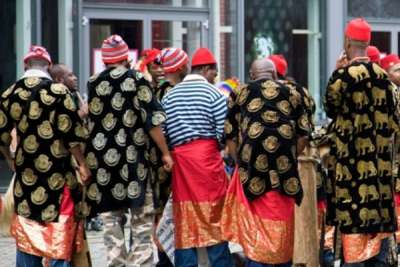 There has been an unsavoury international outcry against the backdrop of the release of a list of wanted criminals by the US-based Federal Bureau of Investigations in which Nigerians of Igbo extraction constituted a majority. One of the pertinent issues the saga instigates is the sad reality that Ndigbo are usually associated with the vaulting ambition to make money at all costs. Back home in Nigeria, we typify a desperate race, always in pursuit of material wealth at the expense of sound moral values. Other tribes see us as a bunch of dubious people people who have attained satanical dimensions in crimes such as drug trafficking, human trafficking, baby factory business, fakery and ritual killing. For the aforementioned reasons, there are many tribes in Nigeria who would prefer to inter-marry with eskimos rather than with Igbos. The perception of such tribes may be faulted on the pedestal of the law of hasty generalisation, yet it is a clarion call on us to watch our back while using our tongues to count our teeth.

The popular apologia that not all Igbos are criminally-minded is true but must we always be on the defensive in the courts of public opinion and perception? In spite of our famed sense of industry, creativity and persevering spirit, why must we allow ourselves to be perceived as the black sheep of Nigeria? In my cross-cultural interactions, I have heard people from other tribes say that it would be easier for a camel to pass through the eye of a needle than for an Igbo man or woman to rule Nigeria. Though everyone is entitled to his/her opinion, we allowed the wrong things to be associated with us because we have perennially refused to take systemic actions against the wrong perception other regions of Nigeria have about us. Unfortunately, this skewed perception has followed us to America, Europe and Asia.

I have always believed that Ndigbo can change the world with our ingenious spirit, yet we seem to have fallen into an eternal slumber of self-delusion, thinking that attaining greatness starts and ends with talent alone. We have not placed the right premium on attitude. We must collectively change our attitude to money and material wealth. We must not allow our egalitarian nature erode our duty of respect to the elderly.

The humble office I occupy today is the brainchild of our amiable governor, engineer David Umahi whose ultimate goal is to reorient all Ebonyi indigenes, especially youths. He has vowed to emancipate NdiEbonyi from all sorts of physical and mental slavery. This is why he is paying very serious attention to the Attitudinal Change concept. Before now, our youths were largely known for selling garri, rice and beans and for hawking goods in traffic across many states of the federation. That downgrading reputation is slowly but steadily being erased with the efforts of my humble office towards changing the warped mindset of our youths. We are making great progress in this regard and governor David Umahi who doubles as the Chairman of the Southeast Governors’ Forum has been playing a very supportive role. I call on all Southeast governors to emulate him by making the concept of Attitudinal Change an integral aspect of their governments. With the spate of negative perception the world has about the Igbos, we must do a lot to prove them wrong.

We should encourage a new generation of the Chinua Achebes, Philip Emeagwalis, Emeka Anyaokwus, Flora Nwapas, of this world. That is one of the very good ways we can shed the burdensome weight of negativity which had manacled our forward movement as a people brain and brawn.

Ray Nkama is Special Assistant to Ebonyi State Governor on Attitudinal Change and writes from Abakaliki.

Our Commission Is Resolute In Exterminating Cybercrime- EFCC