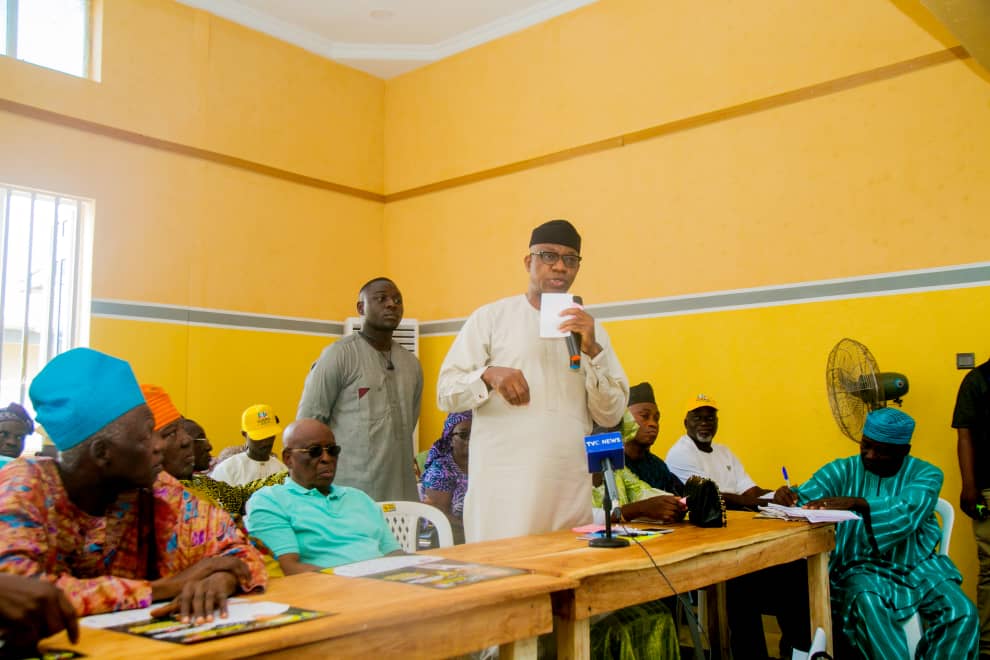 The governorship ambition of the Ogun State All Progressives Congress candidate, Prince Dapo Abiodun receives a significant boost as the Pensioners in Ogun State have declared to mobilise and canvass for him during the governorship election coming up on Saturday March 9th,2019.

They declared this endorsement while playing host to the business mogul during their monthly general meeting held at their secretariat in Abeokuta. The state chairman of the Nigeria Union of Pensioners in Ogun State, Com. Kessington Oduwole during his address informed his members that Dapo Abiodun has been known from his childhood and his father who is also a pensioner is well known to them. He will bring succour to the retires in the State by addressing all our demands.

He said, ‘Dapo Abiodun is someone we have known from childhood. His parents are also Pensioners and are well known to us. I want to assure you that all our wants and needs will be met when he becomes the governor. I thereby implore you all to rally round him and mobilise for him during the poll. I am promising you that he will not let us down. By the special grace of God, we shall accompany him to Oke Mosan by May 29th during his swearing as the governor’ he concluded.

Earlier, the secretary of the Union, Com. Bola Lawal while presenting the challenges facing the Pensioners such as failure of the current administration to pay their gratuities since 2013, irregular payment of pensions and entitlements, lack of input in the current government and many more. He accused governor Amosun of plunging the State into huge debt and not running a listening government.

The former governor of Ogun State, Chief Olusegun Osoba who accompanied the candidate of APC to the event expressed shock that the Pensioners who are classified as senior citizens could be owed that much but assured them that who he has brought to them today will bring succour to their demands. He assured them that his candidate will run a very responsible and responsive government when he becomes the governor of the State.

The entrepreneur turned politician in his address appreciates the Pensioners for their rare show of love and support. He then promised them of qualitative governance at all level if given the opportunity to pilot the affairs of the State.
In his words, he said, ‘I want to appreciate our fathers and mothers who have worked tirelessly for the service of this State.

My parents who were both teachers are also Pensioners. The Pensioners are informed electorates that have influence within their communities and i want to express gratitude for their support. As someone from a private sector, my aspiration was borne out of my desire to see our people being provided with a quality of governance they deserved.

I am assuring you that all your demands will be addressed when I become the governor and I also promise to run a listening and inclusive government ‘ he concluded.