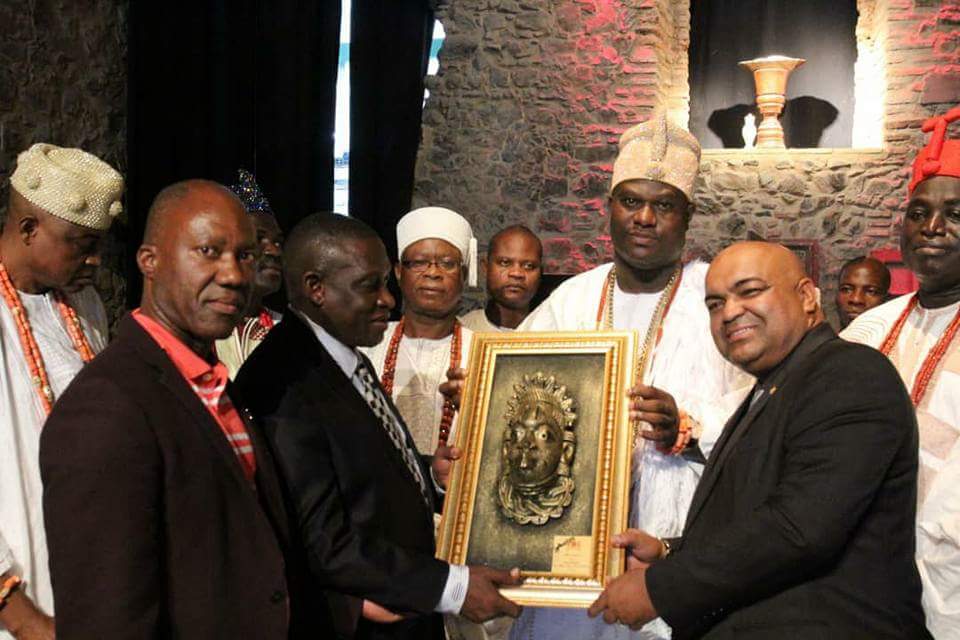 The Ooni of Ife, H.I.M Adeyeye Enitan Babatunde Ogunwusi (Ojaja II) has taken his bid for peace, love, unity and charitable act to a new level. If permitted to adjudge, I will call this a step in the right and novel direction.

Ooni Ogunwusi is one of the foremost Nigerian monarch and Co-chairman of the Nigeria Council of Traditional rulers. Since his ascension to the throne in 2015, he is characterised as a great nation builder considering giant strides taken by him to preach and practice ‘Unity and Love’ within and outside the shores of Nigeria.

He has touched lives with his charitable acts and currently the number one projector of African culture and heritage all over the world. The House of Oduduwa Foundation is the parent structure often used, among other as machinery to achieve these aims.
H.I.M is often described as a cheerful giver by people, most of whom he has touched their lives both materially or financially. Asides from supporting the less privileged, the prestigious monarch is notable for presenting African artefacts to most, if not all of his elite guests, either at his palace or while visiting within and outside the country. Such artefacts includes: bronze-heads, wooden crafts, metal sculptures, fabrics and accessories from all over Africa.

According to H.I.M, those crafts were stolen treasures from Africa and they mean a lot to our people. The artefacts are significant as they represent deities revered and worship in African traditional settings. Taking or stealing them at that point in time means separating the people from their gods and belief which contravene their right to religious worship and association.
The highly revered monarch is of the opinion that, for peace and unity to reign among nations of the world, there must be forgiveness and restitution. It may be difficult for those items to be returned to their original owners but Africans owe those who stole from them forgiveness. Severing them from their property caused them hardship during the period. No amount of apologies could heal such memory, but we must forge ahead to permanently forgive in order to maintain world peace, love and unity.

In furtherance to forgiveness and towards restitution between nations of the world, and at the same time promoting African’s cultural-heritage and ingenuity, H.I.M Ooni Adeyeye Ogunwusi is commencing a promotion of these arts and crafts. Most of these arts are now being produced locally in Ile-Ife and neighbouring communities in large quantities. These artefacts which are characterised as ostentatious goods are now used as gifts and interior home decorations across the globe.

Therefore, these arts and crafts will soon hit the international market again; this time around, they shall be sold on auctions and their proceeds shall go to charitable causes within the formerly colonized states, especially African countries where some masses are suffering and need all the support they can get at this point in time. Proceeds from the stock shall be used to support the basic needs of people and communities; food & clothing banks, baby rescue response bank, homelessness and educational provisions among others are some of the essential provisions that this cause shall fend.

What more restitution is greater than this?
The revered monarch is dedicated to telling African stories to Africans all over the world, as well as people of other races. Ooni Ogunwusi is poised to project black civilisation/globalisation into world consciousness; history has it that civilisation emanated from Africa.
H.I.M shall be using one of his machinery named TellAfrica as machinery to drive this novel idea. TellAfrica is an initiative of Ooni Ogunwusi, a known information hub in Nigeria and online, notable for connecting Africans all over the world to the realisation of who we truly are and not what we think or other races think we are.

We are big, strong, reliable and intellectually sound nation.
Africa and Africans should be celebrated!
Our dates and venue and partners for the events shall soon be announced.
Gbemisola Bisi-Taiwo.

Related Topics:coverstoryCultureooni of Ife
Up Next