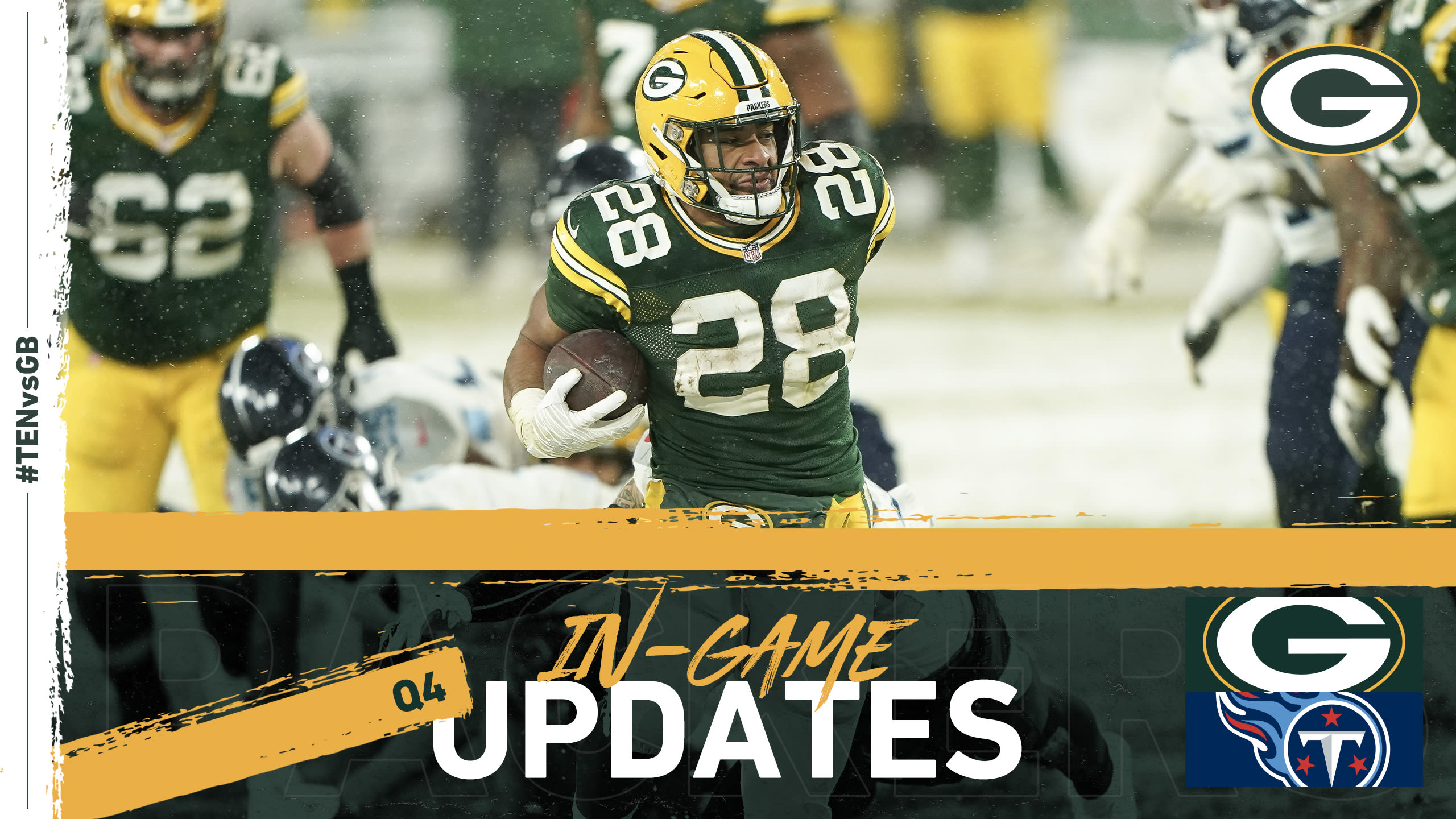 Packers tightens hold on MVP award with rampage over Titans- The race for this year’s NFL Most Valuable Player award officially ended on a chilly, snowy night in Green Bay. It concluded as Aaron Rodgers tossed touchdown pass after touchdown pass and the Packers torched the Tennessee Titans on Sunday Night Football. Before that point, Rodgers was running neck and neck with Kansas City’s Patrick Mahomes for that honor. After this latest performance, it’s hard to see how Rodgers doesn’t deserve it just a little bit more. The Packers answered plenty of questions during their 40-14 win over Tennessee, the most obvious being whether they could sustain their steadily building momentum as the postseason approaches. They’ve got their clutches on the top seed in the NFC playoffs at the moment, and they seem determined not to let it slip away. That has plenty to do with how their future Hall of Fame quarterback has been playing. The longer this season goes on, the more we’re reminded of what has made Rodgers so special in the first place.

The Packers now stand at 12-3, with a season finale at Chicago left on their regular-season schedule. Their dreams of hoisting a Lombardi Trophy at some point in the near future have plenty to do with their quarterback’s excellence.

“It was a solid game,” said Rodgers after completing 21-of-24 passes for 231 yards with four touchdowns and one interception. “I felt good about the performance of our offense. I felt like I was in a pretty good rhythm all day. Similar to last week, I felt like we were running the ball so well that I just had to be patient.”

Rodgers is this year’s MVP for one simple reason: He’s done more with less. Mahomes has produced another monster season with the assistance of the best tight end in football, the best deep threat in football and an assortment of other speedy playmakers at his disposal. The Chiefs have so much talent that they’ve struggled to find touches for three-time Pro Bowl running back Le’Veon Bell. That depth makes life much easier for Mahomes when he steps under center.

Rodgers, on the other hand, has elevated the play of those around him. He surely has his own Pro Bowlers — most notably running back Aaron Jones and wide receiver Davante Adama– and rookie A.J. Dillion made quite an impression against Tennessee (124 rushing yards and two touchdowns). However, few people had heard of targets like Robert Tonyan, Allen Lazard and Marquez Valdes-Scantling until Rodgers started dropping dimes on them. There’s a reason why so many people were lamenting the Packers’ decision to not add more weapons to this roster during the offseason.

It turns out Green Bay’s front office had it right. They thought they could bet on the future (by using a first-round pick on quarterback Jordan Love) and rely on Rodgers to lead them in the present. Now that Rodgers has thrown 44 touchdown passes and only five interceptions this season, he’s made it even harder for his bosses to see an optimal window for getting Love onto the field. At 37, he’s put together a season just one year after many skeptics were openly wondering about his impending decline.

That type of brilliance can’t be dismissed.

“Being around him the past seven years has definitely allowed me to really know what being a true competitor really is,” Adams said. “Everybody knows that I hold myself to a crazy high standard and it’s been like that for a long time. But to be in a situation where I come in and see a guy who’s been balling out as long as he has and not be satisfied with the success he has … being with that guy has allowed me to know what true greatness is.”

The Titans saw firsthand what Adams was referencing. Rodgers threw three of his touchdown passes in the first half. He connected with Adams (11 receptions, 142 yards and three touchdowns) early and often. When the Titans started to rally — they closed the deficit to 19-14 after falling behind 19-0 — Rodgers calmly kept Tennessee at arm’s length by engineering timely scoring drives.

READ  FIFA U-20 World Cup: Prophet TB Joshua Was The Reason For Our Success In Egypt - Gladson Awako

It helps that the Packers defense has improved noticeably over the past month. It did a tremendous job of controlling Titans Pro Bowl running back Derrick Henry and allowing only 260 total yards to a team that was tied for the league lead in points scored coming into this contest. This is another factor in Rodgers’ favor. The Packers needed him to play at a high level when that defense was struggling so mightily that it surrendered at least 28 points in five of Green Bay’s first 10 games.

That defense now is coming around at exactly the right time for Rodgers, who has posted insane numbers regardless of the play on the other side of the ball. He’s thrown at least three touchdown passes and no interceptions on nine separate occasions. He’s tossed four touchdown passes and no picks five times this season. When Titans cornerback Malcolm Butler intercepted Rodgers in the fourth quarter of this latest game, that was the first time Rodgers had turned the ball over in five weeks.

On top of all that, Rodgers still has plenty of opportunities to add to his list of accomplishments. That season-ending game with the Bears has considerable significance because Green Bay can lose their hold on that first-round bye with a loss and a Seattle win. The Packers know their best shot of reaching their second Super Bowl with Rodgers involves playing games in January in Lambeau Field.

As Packers head coach Matt LaFleur said, “It is a different deal when you come in here and play and there is snow. It’s almost what you envision as a kid… it’s snowy and cold and we wouldn’t want to have it any other way.”

The Titans looked ill-prepared to function in those conditions while Rodgers casually slung passes all over the field. He’ll certainly face a tougher defense in Chicago but he also threw four touchdown passes and no interceptions in a 41-25 win over the Bears on Nov. 29. Meanwhile, it’s quite likely that Mahomes will barely be playing at all. The Chiefs clinched the first-round bye in the AFC with their victory over Atlanta on Sunday, making their season finale against the Chargers meaningless.

Of course, Rodgers cares far more about his second shot at a Super Bowl win than an opportunity to win a third MVP. Rodgers also admitted the plan was for Green Bay to play its starters in Chicago regardless of playoff implications. “Now that that’s out of the question, we’ve got to win to get the one seed,” Rodgers said. “It feels like the playoffs started really last week.”

That’s pretty much the case for most teams still vying for spots and seeding. For Rodgers, he has to know there’s even more riding on this run. All he has to do is look around the NFL to see the number of older quarterbacks hoping to win one more title, a list that includes Tom Brady, Drew Brees, Ben Roethlisberger and Philip Rivers. If Rodgers takes a peek inside his own locker room, he’ll see how quickly time is running out for him inside his own franchise.

There’s no doubt that Rodgers is playing as inspired as he ever has. That may have something to do with Love’s presence, it might be just the personal challenge Rodgers puts on himself or it could be a combination of both and other factors. The bottom line is that nobody in the league has put together a better season than he has so far. The way things are heading, it’s fair to assume that nobody else will.