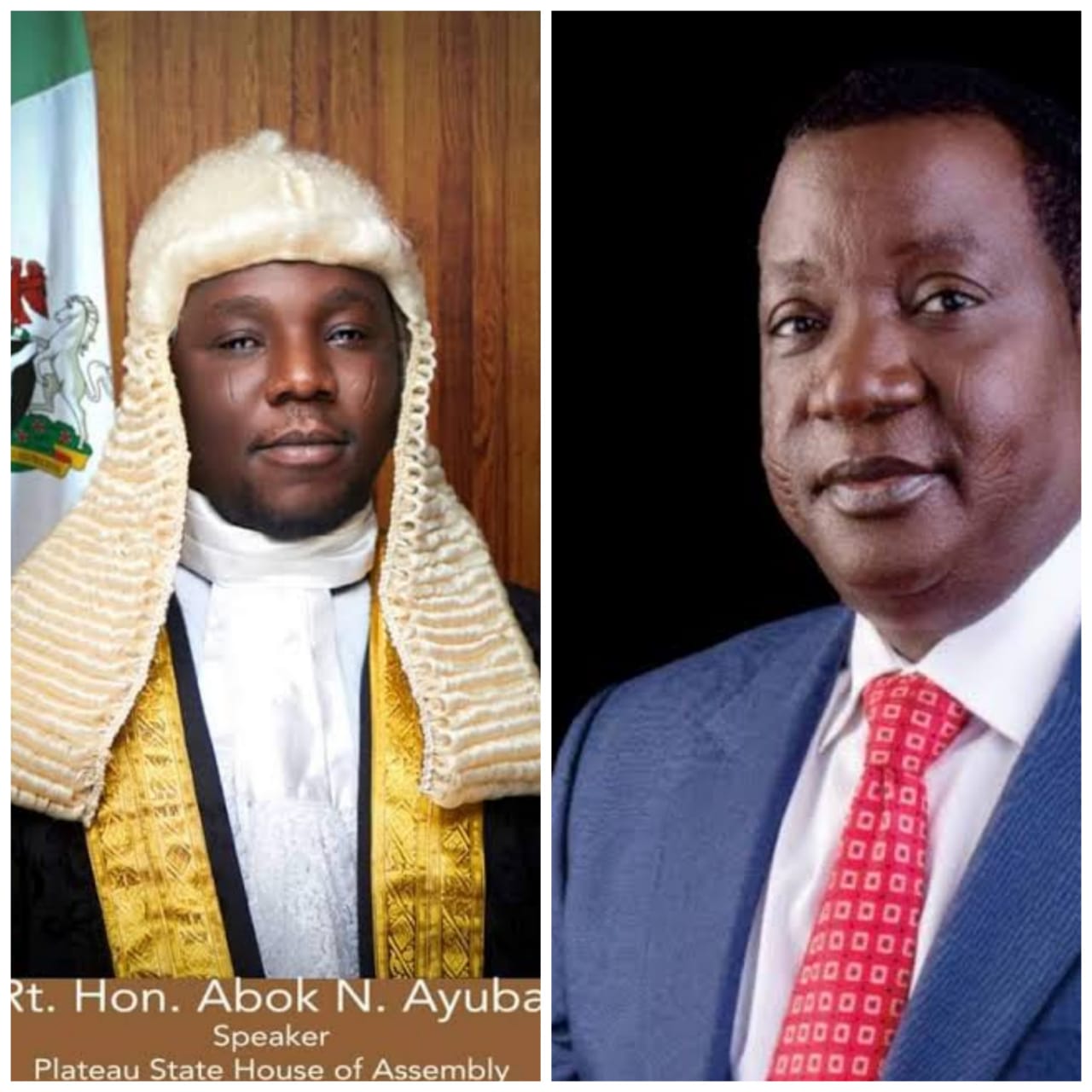 All is not well between the Executive Governor of Plateau State RT Hon. Simon Bako Lalong and the Rt Hon. Abok led House of the Assembly as there is rumor of a move by the executives to impeach the Speaker of the Plateau State House of Assembly (PLHA) Rt. Hon Abok Nuhu Ayuba.

Already, it is confirmed that due to the support and loyalty of majority of the lawmakers to the leadership of RT. Hon Ayuba Abok, a means was devised where APC members were cajoled into signing a document saying they won’t leave the party only to later find out that it’s a signature collected to impeach the speaker of the house. Rt. Hon Ayuba Abok.

Another option they masterminded and are weighing is to falsely lay allegations on the speaker or suspend him from the party.

In a well hidden feud the relationship between the Governor and the speaker has gone sour following reported high-handedness of the Governor who treats the legislators as an extension of the office of the Governor so much so that the request of the house to have access to some financial documents in MDAs that they appropriate funds for were denied the house.

The situation got even worst when communities in Jebu Miango and Yelwa Zangam were attacked.

The Speaker not only identified with the people of Plateau by granting them audience, he went as far as visiting the wounded victims of the attacks and also declared to pay their bills while the Governor was reportedly galavanting and playing golf in IBB Golf Club Abuja.

On another occasion, while the students of the Plateau State Polytechnic were protesting the strike embarked upon by lecturers of all tertiary institutions in the state, a combined team of security men opened fire on the defenseless students, beat and subjected these students to all manner of barbaric treatments, right under the watch of the State Government who only watched and did nothing.

The Honorable Commissioner for Information, Dan Manjang went on air to say that no student was harmed only to find out that one student was killed (may GOD rest his soul).

The Lalong administration was so sensitive to the point that not a single government representative was present at the burial of the student but the speaker was there at the funeral in person.

Such moves have endeared the speaker to the people who now see him as the only voice in the administration standing by them, a move that is rumored to have sent shivers down the spine of the executives who fear that with the popularity and acceptance of the speaker by the plateau people , he may have the Governor impeached.

The constitution has given the conditions under which the speaker can be impeached – it must be by a two – third majority of the house, in this case not less than 18 members must consent to the impeachment.

Reliably information has revealed that 14 APC members of the House of Assembly have signed for the impeachment, howbeit through dubious means.

With the crises in the APC and this latest development , it seems plateau are out for interesting days.

A few questions beg for answers;
1. Who owns MC Hooms Nigeria ltd
Who owns PHK Hooms Nigeria Ltd?
Who owns Azanchi Nigeria Ltd?
(Certified true copies of the MEMART are available)
These are companies that have been reportedly used by blood relative of the Executive Governor of Plateau State to purchase fertilizer for the state and local governments (records are with the Chairman House Committee on Public Accounts). Same companies were allegedly used to also fraudulently get the contract for the supply desks and chairs at SUBEB totalling over N2,100,000,000. Total supply made was about N600,000,000 (it was learnt that the House of Assembly has set up an Audit Team to uncover all these).

Has the Constitution of the Federal Republic of Nigeria not kicked against the idea of family members of public office holders getting contracts related to the public?

2. The Plateau State Independent Electoral Commission (PLASEIC) has also allegedly operated Accounts outside the provision of the law. This contravened clause 414 of the Financial Regulations 2009, which clearly mandated all MDAs to return all unused funds by 31st December of the financial year to the Consolidated Revenue Fund as mandated by law.

It may be recall that after the 2018 local elections in Plateau State, four local governments were exempted from the polls, for security reasons, and PLASIEC had over 2 billion naira in accounts domiciled in UBA and Zenith Bank.

That accounts depleted to about N500 Million in 2021 which necessitated the reported illegal deductions from Local Government Accounts to find the recent elections. Documents were requested by the special Audit Committee set up by the House but the Governor directed that no document be availed to the committee. What is the Governor running away from?

3. Fictitious resolutions were reportedly drafted by a former Majority Leader who is the croony of the executive Governor, Hon Joe Bukar and signed off without any evidence of sitting in the house (copies of can be made available).

Interestingly, he was one of the major people who canvassed against the financial autonomy currently operated in the state and is secretly vying for the position of House of Assembly to represent Shendam Constituency so he can become speaker.