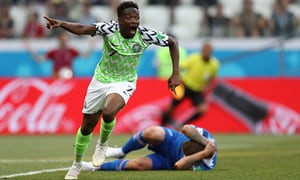 In what looks like a miracle, the super eagles of Nigeria has made the country proud by defeating Iceland by 2 goals to Nil at the ongoing Russia 2018 World cup.

It was a very great moment for the whole nation as there was jubilation in every nooks and cranny of the nation.

The shout of victory was rented in the air as goals came in from Nigeria’s forward, Ahmed Musa.

It would be recalled that Nigeria during their last match against Crotia lost 2 goals to Nil and a lot of backlash was received because of the results.

The fate of the team is now to be decided by the outcome of their game against Argentina on Tuesday.

‘We will die there against Iceland’ – Nigerian Player, Ndidi