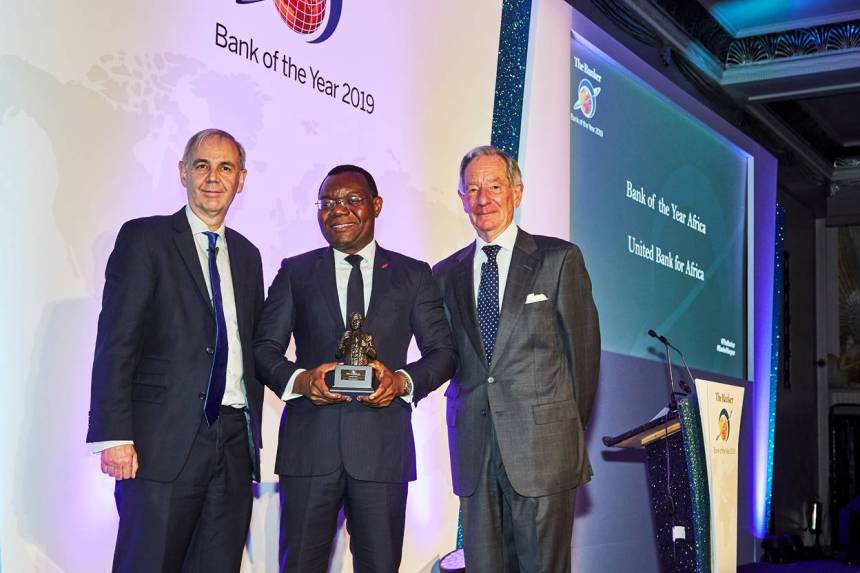 Interestingly, the Banker Magazine has once again selected United Bank for Africa (UBA) Plc as the “African Bank of the Year 2019”.

This is the second time, UBA has clinched the prestigious award, having been named Best African Bank of 2017 by The Banker magazine. This year, UBA also won best bank category in 6 of its subsidiaries: UBA Benin, UBA Tchad, UBA Gabon, UBA Congo, UBA Cote D’Ivoire and UBA Sierra Leone.

The unprecedented win marks the first time ever in the history of the banker awards, that any one bank will be given as many as six wins including the grand regional award.

The awards ceremony took place at the Sheraton Grand, Park Lane in London at the weekend where UBA was represented by its CEO, UBA Africa, Victor Osadolor who received all seven awards on behalf of the bank. John Everington, Middle East and Africa Editor for The Banker, said the aim of the award “is to highlight industry wide excellence within the global banking community. The winner is selected from participating banks in each of the countries from which entries are received for the competition.”

UBA’s Group Managing Director/Chief Executive Officer, Mr. Kennedy Uzoka, who expressed delight over the recognition from The Banker stated “The recognitions come as a reassurance that we are on track in consolidating our leadership position in Africa, as we continue to create superior value for all our stakeholders