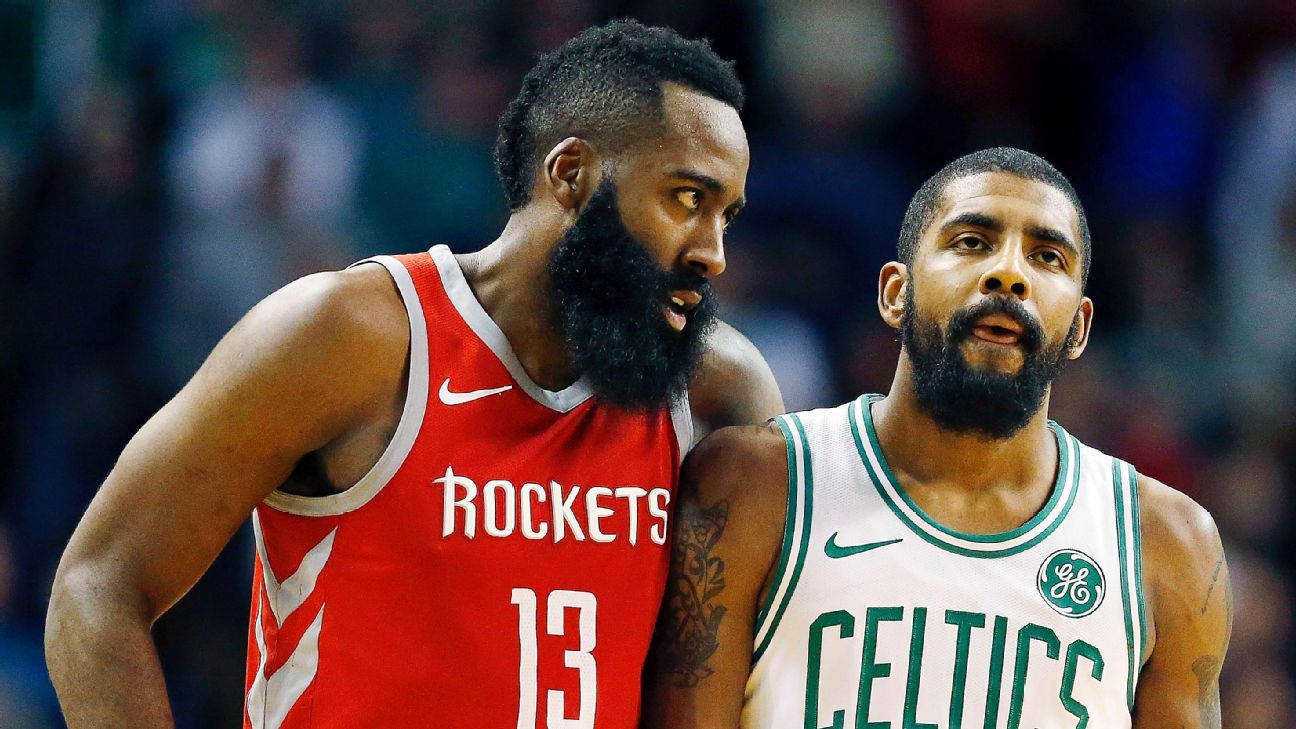 The two NBA stars have shown they can help their team win with clutch shots and occasionally with defense. But they also have deserted their teams when they have needed them the most.

So how can James Harden and Kyrie Irving co-exist on the Brooklyn Nets when they have consistently allowed their negative habits to overshadow their All-Star talent? Nets coach Steve Nash did not say much on those dynamics or anything else involving the harden trade because it wasn’t official. Neither did Nets star Kevin Durant, whose perspective matters for numerous reasons.

He has become the Nets’ top scorer and leader. He has remained close friends with Irving. He knows what makes Harden tick after playing together in Oklahoma City (2009-12) before Harden left for the Rockets for more money and a bigger role. Through two NBA titles and two Finals MVP awards out of three Finals appearances with the Golden State Warriors, Durant mastered how to complement his All-Star teammates (Stephen Curry, Klay Thompson, Draymond Green) while still remaining one of the league’s top players.

Though Durant described his time with Harden in Oklahoma City as “fun”, I cannot see how the Harden-Irving pairing will be.

Sure, Irving helped the Cavaliers win the 2016 NBA title partly after making a clutch 3-pointer against Golden State in Game 7. A little more than a year later, Irving requested the Cavaliers to trade him amid reported tension with LeBron James. He may consume a lot of oxygen in a room. But no one can question James’ talent and that his presence leads to team-oriented play.

Then, Irving wore out his welcome in Boston by alienating his younger, blossoming teammates. After missing 62 games last season in Brooklyn amid season-ending surgery to his right shoulder, Irving could not establish himself last season. This season, Irving showed promising signs with his play and chemistry with Durant before missing the past five games because of undisclosed personal reasons. The NBA has also investigated video  that shows Irving violating the league’s protocols by attending his sister’s birthday without wearing a mask.

“I haven’t had an opportunity to know any new details about Kyrie’s situation,” Nash said. “I’ll just rely on the front office to learn more as we go. They’re the ones that I think are going to do the messaging on that front.”

Sure, Harden thrived with Durant in Oklahoma City, but he hadn’t fully blossomed into a star yet. Sure, Harden recorded three NBA scoring titles while leading the Rockets to three Western Conference Finals out of seven playoff appearances. Sure, Dwight Howard’s immaturity played a larger role in their dissolved partnership (2013-16). Sure, the Rockets might have won an NBA title if not for Chris Paul’s hamstring injury in Game 5 of the 2018 Western Conference Finals against Golden State. Sure, Harden and Russell Westbrook showed decent chemistry during their lone season last year.

Still, Harden bears responsibility for the Rockets’ Game 7 collapse against Golden State in 2018 that coincided with Houston missing 27 consecutive 3-pointers. Harden deserves scrutiny that both Paul and Westbrook took issue with both his high usage rate and his work habits. Though Harden had right to feel frustrated with the Rockets’ direction amid departures by an accomplished head coach (Mike D’Antoni) and general manager (Daryl Morey), he had no right to disrespect his teammates and break the safety protocols so openly.

“The (Harden) disrespect started way before – his approach to training camp, showing up the way he did, his antics off the court,” Rockets center DeMarcus Cousins said before Houston traded Harden. “It’s completely unfair to the rest of the guys in the locker room.”

READ  I was misquoted, i never became a Muslim - Emmanuel Emenike

That leaves the Nets with various questions to answer on how Harden will fit in their locker room.

The main one: How will two ball-dominant guards be able to coexist and not experience significant chemistry issues?

“That’s a great hypothetical,” Nets coach Steve Nash said. “We can address that at another time.”

Because the trade is not official, Nash could not entertain how Harden and Irving would share ball handling duties. Or how Harden, Irving and Durant would carry the bulk of the scoring. Or how the Nets would absorb the depth they sacrificed in guard Caris LeVert, center Jarrett Allen, forward Taurean Prince.

But these are hypotheticals Nash will have to answer soon.

“Basketball is about playing together and being the best you can be,” Nash said. “So no matter who you are, it’s about finding that connectivity and balance within a team and trying to be greater than the sum of your parts. That doesn’t change no matter what your team looks like.”

To be clear, my skepticism about the Harden-Irving pairing does not necessarily have much to do with the Nets themselves.

Nets general manager Sean Marks has done a masterful job with collecting assets, building a culture and then making big-time moves. In today’s NBA, such moves are made after knowing directly or indirectly how the team would feel about it. The Nets could still win an NBA title or at a high level despite any tension between Irving and Harden. Besides, Irving or Harden could become the replacement for the other should Marks find it necessary to trade one of them later.

READ  Photo of the Day : When your barber has an Evil spirit...lmao

Nash, D’Antoni and Durant have have enough experience to know how well-intentioned ideas can lead to disaster.

Nash joined the Lakers in 2012-13 in hopes to win his first NBA title. Instead, he spent that season battling injuries, clashing with Howard over his attitude and unsuccessfully persuading Kobe Bryant and Pau Gasol to embrace D’Antoni’s offense that put less premium on post-up play. D’Antoni struggled managing those varying player agendas and personalities. Though he coached the Rockets to plenty of success, he also saw up close the tension that Harden had with Paul and Westbrook. Durant spent most of his time winning in Golden State, but he also experienced the occasional tension over the team’s offense, his pending free agency and Draymond Green’s personality.

Expect the experience with Harden and Irving to become much more difficult. Unlike Curry, Thompson and Green, neither Harden nor Irving has consistently shown their willingness to buy into a team concept. They mostly look for their own and only occasionally defer to others. They have shown decent defensive effort in big and small moments, but those times only happen sporadically. And they already have shown troubling signs this season that they don’t take the safety protocols as seriously as they should.

The result? Harden and Irving might help the Nets win some games and score a lot of points. But their pairing will disrupt the team’s culture and championship hopes. Both players have proven they can do wonders with the basketball. They have not shown enough evidence, however, that they can avoid spending their energy fighting over it.