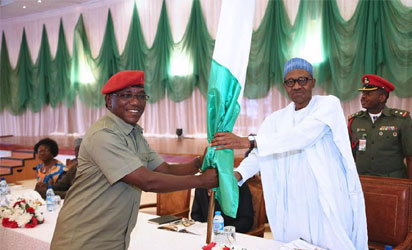 It’s not a good news from the Minister of Sports, Solomon Dalung as he made a pronouncement which sounds really bad.  In an interview with international media organisation,Voice of America, Hausa  he said Nigeria does not need to attend the next World Cup holding in Russia saying  The World Cup is not just a football competition.

It also represents a bigger avenue for nations to showcase their football artistry to a global audience, with players getting to secure new and bumper contracts and endorsements, which in turn, impact positively on the country’s Gross Domestic Product and Foreign Direct Investment. Football is business and the World Cup fetches money for all participants. It is top in entertainment and business. Qualifiers even earn more than $5m from Fifa.

Besides the Olympics, the World Cup is by far the single biggest sports competition in the world, drawing record crowd appearances and creating a never-seen like before football atmospheres for its one-month duration. The road to the next World Cup in 2018 is on, with the Super Eagles are leading the proverbial group of death with six maximum points from two matches against Zambia and Algeria. Cameroon, the only African country with the most appearance at the World Cup make up the group, from which only the first-placed team qualifies for the event. Having missed out on a place at the next Africa Cup of Nations, starting in January in Gabon, Nigeria desperately needs to play at the World Cup to make up for the lost chance to play at AFCON 2017 but bizarrely, the one who ought to be championing the cause of going to the World Cup is ridiculously the one kicking against it. Minister of Sport and Youth Development, Solomon Dalung yesterday stunned all when he told the Voice of America that he was against Nigeria’s participation at the World Cup. His reasons: “That competition stinks of corruption; that Nigeria is too poor to waste money on it and that Nigeria would never win the trophy”. The implication of his statement is also that it is not necessary to waste money qualifying when you cannot win the World Cup. As shocking as these may be, Dalung, a lawyer by training, said Nigeria should be content with playing at the Nations Cup, Olympics, Commonwealth Games. He said that Nigeria could win the Nations Cup but not the World Cup. World Cup finalists are guaranteed huge sum of money running into millions. According to Dalung, “The cup that we can win is the African Cup of Nations. There is nothing again that will take us to another man’s balcony in the name of the World Cup. We already have the Commonwealth Games and the Olympics. For these, we can attend such meets. But I am opposed to the World Cup. We don’t agree to it. Conspiracy in the World Cup is too much,” he said, a statement that could upset the world governing body, FIFA. He was not done. “There is the issue of bribery and favouritism. There is also the issue of corruption before you are even given the hosting rights. We are here suffering from hunger and we don’t have money for such things. That is why, even if we try many times, once it gets into the politics of the game, we can never win. “That was why this year, we had to tackle him (FIFA President, Ginani Infantino) and we said, ‘you , Infantino, if you win this election, you have to give us a position. If not, we shall not agree.’ And you see , by the grace of God, he even picked an African as his Secretary-General. That means he has started taking honey and rubbing on our lips. That means that one day, we shall get to really lick the honey.” This is ridiculous and unbelievable. But they are the exact words of Sports Minister Dalung, a man, who has allegedly fanned the embers of discord, disunity and crisis in the Nigeria Football Federation. It is recalled that Dalung was the unseen hand in the crisis of leadership, that rocked the NFF after Chris Giwa threatened to seize power from the Amaju Pinnick-led Executive Board. Despite CAS and FIFA’s unambiguous backing of Pinnick’s board, Dalung called for a meeting between Pinnick and Giwa in his Abuja office, which snowballed into an all-out fight between both gladiators. As if that was not enough, the Minister has continuously asked the Amaju led board to co-opt Chris Giwa and his members into their board, ignoring the fact that membership of the board is through election. It has been from one dispute to another and Nigerian football has been in court. Truly, football disputes are out of the jurisdiction of the ordinary law court as the Courts of Arbitration for Sports in Lausanne, Switzerland sits over all disputes in sports. The minister’s latest comments confirm him as a total stranger to sports who has bluntly refused to learn the ropes.