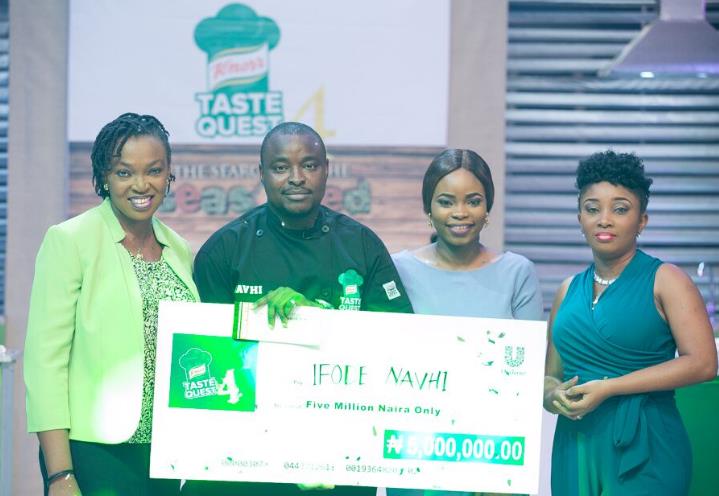 In what can be described as 13 weeks of spectacular, amazingly interesting and creative moments, Nahvi Ifode has finally emerged the “Seasoned one” on the premium cooking show, Knorr Taste Quest Season IV.

At the finale of the leading cooking competition, six contestants were whittled down to three, who later battled it out in the final task which produced Nahvi Ifode as the winner, Emmanuel Ehimen as the first runner-up and Oluwaseun Akomolafe as the second runner-up.

Announcing the ‘Seasoned One’-the Winner, the Brand Building Director Foods, Unilever, Nsima Ogedi-Alakwe expressed her delight at the dedication, persistence and creativity employed by the contestants during the competition. She further shared her satisfaction on how the cooking competition has grown brand awareness over the years. On her part, the Brand Manager, Knorr, Jennifer Okpoyo commended the participants for their commitments. According to her, “It was an amazing journey and seeing all the individual tasks the contestants went through, I am very proud of all of them and I will like to say congratulations.”

In the same vein, the judges, Dr Robert and Chef Fregs showed their satisfaction at the outcome of the competition, especially the doggedness of the contestants during trainings and tasks. “It was great meeting all the contestants from the audition till the end of the show,” Chef Fregs said.

The winner of the premium cooking competition, Knorr Taste Quest IV, Nahvi Ifode was rewarded with N5 million from Unilever and N100, 000 worth of shopping voucher from Shoprite. First runner-up, Emmanuel Ehimen and second runner-up, Oluwaseun Akomolafe got N1.5 million and N750, 000 from Unilever respectively, while Shoprite rewarded each of them with N50, 000 worth of shopping vouchers. Speaking on behalf of the winners, Nahvi Ifode appreciated Knorr and Unilever for creating such an excellent cooking competition with amazing fan base and reach. “I want to sincerely appreciate Knorr Nigeria. Words cannot fully express my gratitude” he said.

From the first time it aired on television, Knorr Taste Quest has evolved and blossomed into a showcase of the best in culinary matters, setting a standard for how cooking competitions on television should work. It is fast becoming a favourite show which many viewers always look forward to, as already indicated on the growing fan base asking when season 5 would begin.