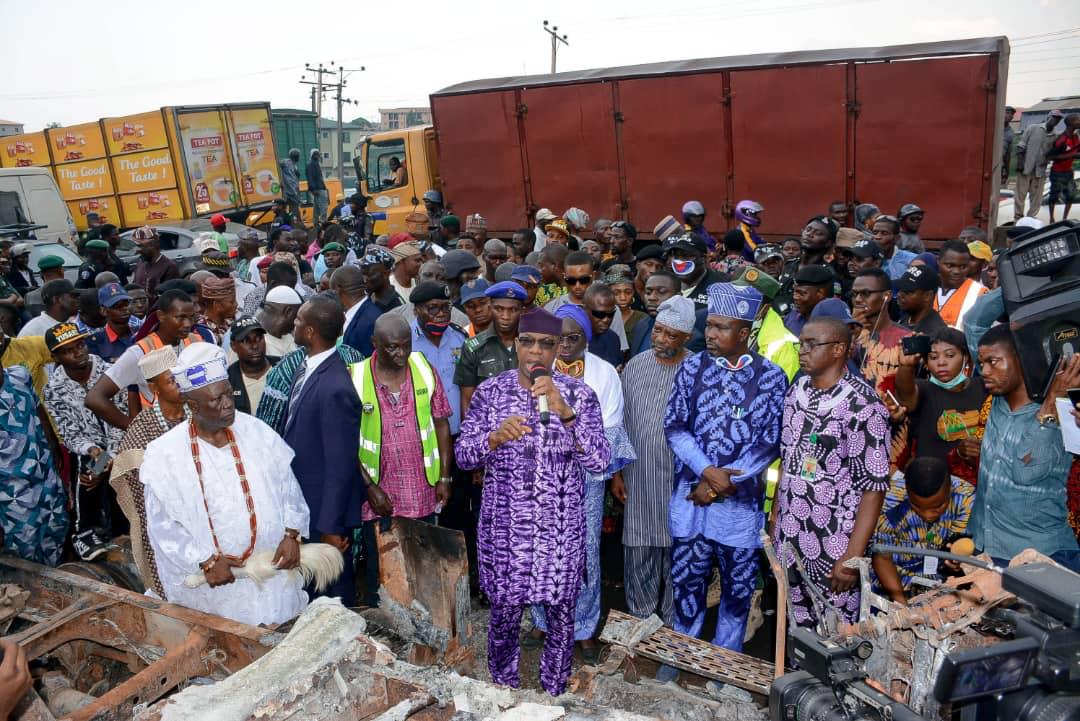 Ogun State Governor, Prince Dapo Abiodun has promised that the incessant accidents on the Lagos-Ota-Abeokuta Expressway would soon be a thing of the past.

An emotional Governor Abiodun wept as he ordered the transfer of victims to tertiary healthcare facilities in Lagos and Abeokuta promised to pay the medical bills of the victims.

Two people reportedly died in the inferno and properties worth millions of naira destroyed when a fuel laden truck went up in flames after being involved in an accident as a result of brake failure.

Governor Abiodun, while addressing residents at Ota toll gate and the State Hospital in the town noted that the Federal Government should accede to the demands of both the Lagos and Ogun state governments to reconstruct the road to stem the incessant accident in the axis.

He said: “I am most distressed by the news of the midnight inferno at the Sango toll gate, which was the result of an accident by a fuel laden truck.

“It is heart breaking that many lives were lost in addition to properties running into millions of naira.

“This sad occurrence has made our quest to take over the management of this road more compelling. The incessant road mishap around the toll gate axis is avoidable. While I commiserate with those who lost their loved ones and property, we shall do everything humanly possible to forestall future recurrence.”

Governor Abiodun prayed for the repose of the soul of the dead and called for caution on the part of motorists conveying fuel and other explosive products across roads with heavy vehicular movement and human traffic.

“May I use this opportunity to once again plead that the Federal Government should approve the request of both the Ogun and Lagos State Governments to take this all-important Lagos-Ota-Abeokuta expressway over,” he said.

The governor said firefighters and officers of TRACE and sister agencies have since been on ground, putting out the fire, easing its effects on traffic and attending to victims.

The governor reassures the people that the joint efforts with the Lagos State Government will be intensified, to take over the road from the Federal Government in order to bring in the needed succor.

“Once the road is taken over, expedited action will be taken to immediately begin reconstruction, so that there may be easy movement of goods and person, and consequently, a reduction in the occurrence of accidents of this nature,” the governor added.