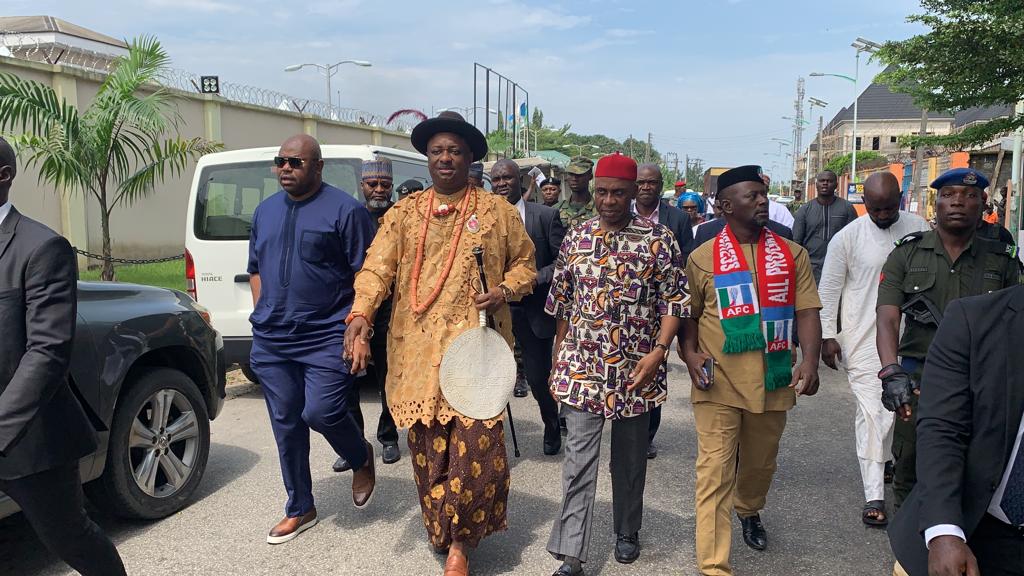 The Minister of Transportation Rt. Hon. Chibuike Rotimi Amaechi has called on the people of the South South to be united as one as a way of fast tracking the development of the Niger Delta Region.

Amaechi made the call on Thursday, during the grand Reception and Empowerment programme held in honour of the Honourable Minister of State for Labour and employment, Festus Keyamo in Uvwie Kingdom, Delta State.

He said, “I have been working now for the last five years as Minister of Transportation, with the help of the president, I have delivered Abuja – Kaduna Railway and it is running. By January to February we will deliver Itakpe-Warri. The rails are ready and by the end of December, the coaches will arrive. Between January and April, we will deliver Lagos-Ibadan and by November 30th, 2019, we will start a test run of Lagos to Ibadan.

“But there is a problem. We did a test run from Itakpe to Warri, but our young boys are not good. Lagos to Ibadan, nobody stopped us, no village came out or harassed us, we are nearing completion , we will be out of there by April. But Itakpe to Warri, if I was not from the South South, I would have stopped, the project.

“Warri sea port was not working. We gave a dredging contract, six months we are arguing, I would have stopped it if I was not from South South. I have warned them, if they don’t stop, we will pull out. Companies in Warri have all left. Imagine the number of people that they would have employed, contracts they would have given if those companies were still here. Now that they have all gone away, kidnapping has become the source of livelihood,” Amaechi lamented.

The Minister therefore appealed to the people to eschew crime and let development take its full course in the region.

On his part, the Minister of State, for Labour and Employment, Festus Keyamo who was honoured by the people of Uvwie kingdom said before his appointment as Minister he had vowed to let the people of Delta state feel the impact of his position.

“I want to speak from my heart, so I want all of us to be united. The empowerment we bring will be for everybody, it will not be for even APC but for all Deltans as a whole. President Muhammadu Buhari has set the tone for us. He has said he wants to lift 100million people out of poverty and your son (myself) and my brother sitting here, Director Genaral, National Directorate of Employment (NDE) Nasiru Mohammed has been put in charge of the agency to create these jobs and to lift people out of poverty. So, we should be ready. You can see we are just less than two months in office but we are in a hurry to come.

‘’I am happy to announce that the National Directorate of Employment (NDE) that I supervise as Minister, when we leave here, we shall be going to the PTI centre where a number of empowerment programmes will take place for the people of Delta state through NDE. We shall be giving out small loans to about 1000 women and youth today, items to empower some of our women and kick off their businesses. It’s not much but accept the token for now, sewing machines, knitting machines, welding machines and carpentry tools and cosmetology packs for women.

Earlier, His Royal Majesty Dr. Emannuel Sideso, Abo 1 the Ovie of Uvwie Kingdom thanked President Muhammadu Buhari for finding worthy a son of the Uvwie kingdom to serve as Minister..

While giving words of advice he said, “to all our political class, please note that a good politician is to serve the people and the country and not to serve himself or herself. Let us not use our campaign advantage position to wage war to the people we are supposed to rule.

“Also, the spirit of love among our children especially those that are in politics is very paramount irrespective of political party. Our children need to work together in love because it is the only way Uvwie kingdom can retain peace and sustain the progress’’